As you know, DJI has created a specific App for piloting its small 249 gram drone, the DJI Mavic Mini. The App, called DJI Fly, is available in the Google Play and Apple Store online stores. The functionality of the App, for the two versions of the S.O. they are described in the relevant DJ Fly iOS and DJI Fly Android tabs.

The new version, released on March 27th, at least for the iOS system, in addition to introducing greater stability, a solution to small bugs, has introduced a new option, potentially very dangerous, as far as RTH or Return To Home is concerned.

Purpose of the RTH function

The RTH function – Return To Home – is an option that allows you to recall the drone. In this case the DJI Mavic Mini, to the take-off position by pressing the physical button on the remote control, or by selecting the same button on the smartphone screen. The drone will then return at home (i.e. at the home point).

The RTH function, therefore as an automatic procedure, can be activated in relation to these three cases:

RTH settings in the previous version of DJI Fly (1.0.6)

The previous version of the DJI Fly App, 1.0.6, in the settings under “Security“> “Advanced security“, there was the possibility of stopping the engines of the DJI Mavic Mini in two cases: “Emergency only” or “Always“. 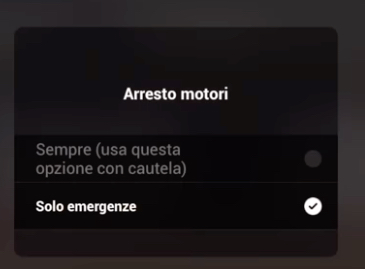 The setting therefore clearly defined the two possible scenarios without ambiguity and without the drone could escape from the pilot’s control.

With reference therefore to the failsafe situation, described above, when the signal between the DJI Mavic Mini and radio control is lost for at least 11 seconds, the new version of the DJI Fly App introduces three possible actions that the drone can perform when it is encountered the loss of signal between the drone and the remote control: 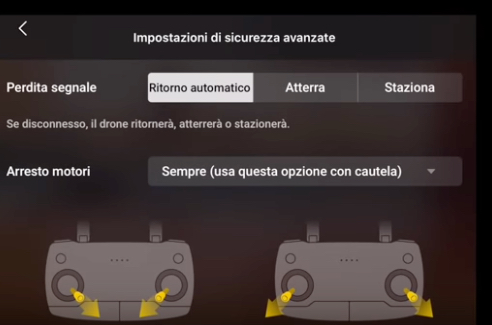 With reference to the “Land” option, this is potentially very dangerous because, if active, it will land the drone wherever it is, with the real possibility of both creating problems and losing the drone.

This option therefore is undoubtedly not to be selected in the advanced security options, in fact make sure before flying that you have selected the first option “Automatic return“, if you do not want to run the risk of losing the drone or creating pointers.

In order to ensure the return of your DJI Mavic Mimi to the take-off position, once the drone is turned on, it must acquire the home point. This activity , when completed, is clearly indicated by the flashing of the green light on the drone.

It is good also to remember that the home point can be “updated” if you move and want the drone to take this into account to return to you in case of need.

Furthermore, an important note is to set an increasingly higher RTH height than the altitude where we are because the DJI Mavic Mini has no sensors. In this way, with a higher RTH – even 40 meters -, you will avoid the impact with obstacles such as pylons, trees, tension lines, etc. 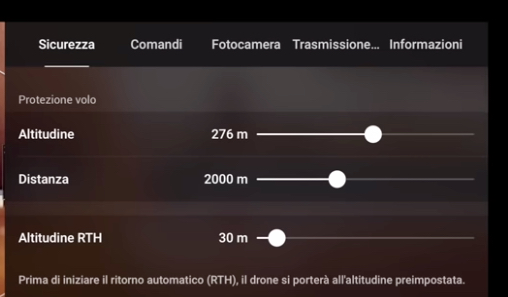 In the unfortunate event that you have not changed the setting and the drone lands where it is, I remind you that through the App in the “Security“> “Find my drone” tab you can locate the last position of the Mavic Mini, and through the coordinates GPS and with find my drone it is possible to track drones, taking also advantage of the acoustic signal emitted by the drone if it is still on.

Note related to the images: The images showed in the article are screenshots taken from the DJI Fly App (versions 1.06 and 1.08). The App developer is the legitimate owner. The use of the images is exclusively for the purpose of a better understanding of the contents of the article. The highlighted image is made by 4mydrone.