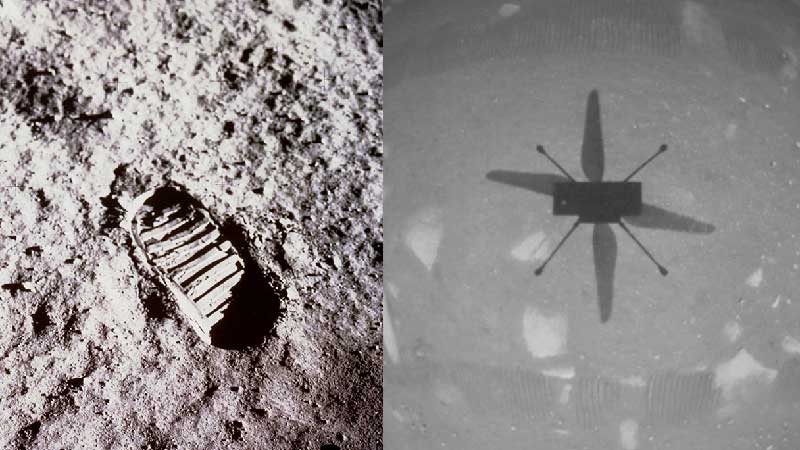 Ingenuity, the NASA UAS drone landed on Mars with the Perseverance rover, after the first hovering flight on April 19th, 2021, took off to perform some maneuvers in the Martian atmosphere.

Ingenuity – Fly into the Martian atmosphere

The maneuvers performed by Ingenuity during this second flight which took place on April 22, 2021, the 18th Martian day (Sol), Mars time 12:33 pm. The flight in total lasted 51.9 seconds and, in addition to reaching a height above the Martian ground (A.M.G.L. – Above Mars Ground Level), it was also characterized by lateral displacements.

Ingenuity in fact this time went up to 16 feet (5 meters). After the helicopter hovered briefly, its flight control system performed a slight tilt (5 degrees), allowing some thrust of the counter-rotating rotors to accelerate sideways for 7 feet (2 meters) from the NASA website).

The drone-UAS from the hovering position therefore rotated on its vertical axis to point the camera in different directions, and then land.

As stated by the chief pilot Håvard Grip, of Ingenuity at JPL: “It sounds simple, but there are many unknowns about how to fly a helicopter to Mars. That’s why we’re here: to make these unknowns known.” 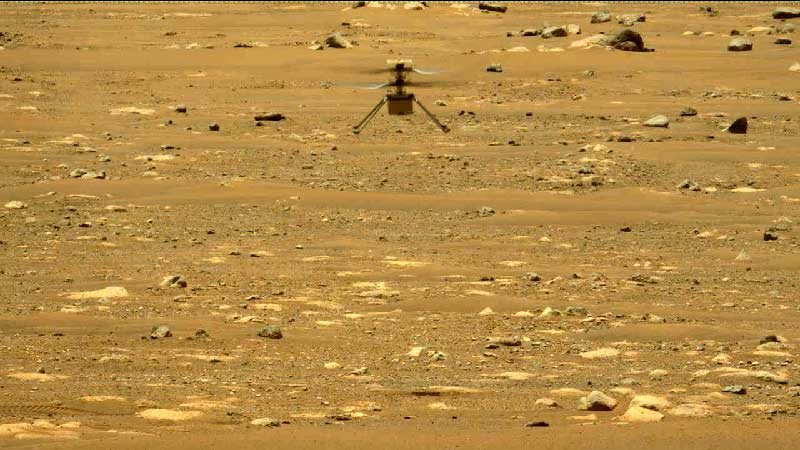 Ingenuity – Curiosity: the Martian day and the Sol

With the term Sol, astronomers indicate the length of the average solar day on Mars. Sol is used to indicate the number of days a probe has passed on the Martian soil. The term therefore applies to both the Perseverance rover and the Ingenuity UAS-drone.

Having established that the Martian day is longer than the solar day, since the landing of a probe (e.g. Perseverance) occurs at a certain Martian time, to simplify the calculations and have a certain and simpler reference, conventionally it was decided to consider, for the calculation of days, the landing of any probe on Mars starting from the local (Martian) midnight of the day before landing.

Despite this convention, for some missions such as Viking and InSight the day of arrival on Mars was considered as Sol 0, for others such as Spirit and Pathfinder as Sol 1.

Take away from the Ingenuity experience

As well highlighted by the chief pilot Håvard Grip, of Ingenuity at JPL about the maneuvers carried out by Ingenuity during the first and second flight, i.e. take-off, landing, hovering, rotation and movement, even if simple operations are the basis of a correct morality of learning drone-UAS flight techniques and a great approach to familiarizing yourself with the drone-UAS.

In fact, drones are all the same and in the air they have different behaviors in relation to their weight, wind speed, and approach to maneuvers (especially if performed at speed). A gradual approach, especially for newbies, to the drone-UAS or to the new UAS model, which consists in becoming familiar with the machine before embarking on reckless flights is part of the best practices being adopted for any novice or experienced pilot.

Unfortunately, this simple and logical approach is not part of the indications provided, for example, by the texts to prepare for obtaining the pilot certificate categories A1-A3, much less the questions.

Credits about images: The cover image is taken from the NASA website (NASA / JPL-Caltech), as are the images in the post, which are owned by NASA. The use of the images is exclusively for the purpose of a better understanding of the contents of the article. Thanks to NASA for sharing these wonderful images.
Gp up