In the purchase phase of the drone it is fundamental to know how to fully understand the technical characteristics of the drone being evaluated. But what are the technical specifications of the drone, which indicators are important, how are they interpreted and above all where to acquire them? This guide aims to answer these three questions and provide a methodology for choosing the drone.

The technical specification of a drone, is nothing more than a document that through technical data describes for the drone its specific functionality, its specific use or its performance levels.

We could therefore summarize the previous concept by saying that the technical specification of a drone is a set of KPIs (Key Performance Indicators), able to describe the performance capabilities of a drone.

Be prepared for this! However, the 4mydrone website reports for almost all drones the technical data sheets complete with all the information that makes it possible to compare the different professional drone models.

In the technical specifications of the drones, there is various information. Among these, for a good analysis of the drone, it is important to know the basic indicators, which are:

Although the maximum tangent altitude and maximum horizontal distance achievable indicators may seem irrelevant, as the regulation sets the maximum flight altitude at 120 meters and the flight strictly in VLOS (i.e. sight flight – See Drones – Acronyms & Terms), it is actually good to know them for the following reasons:

As for the payload, not all drones allow a configurable paylaod, but many drones have a “standard” payload (video camera). However, it is good to know – if available – the paylaod that the drone can transport so that it does not affect the drone’s MOD (Operational Take-off Mass). 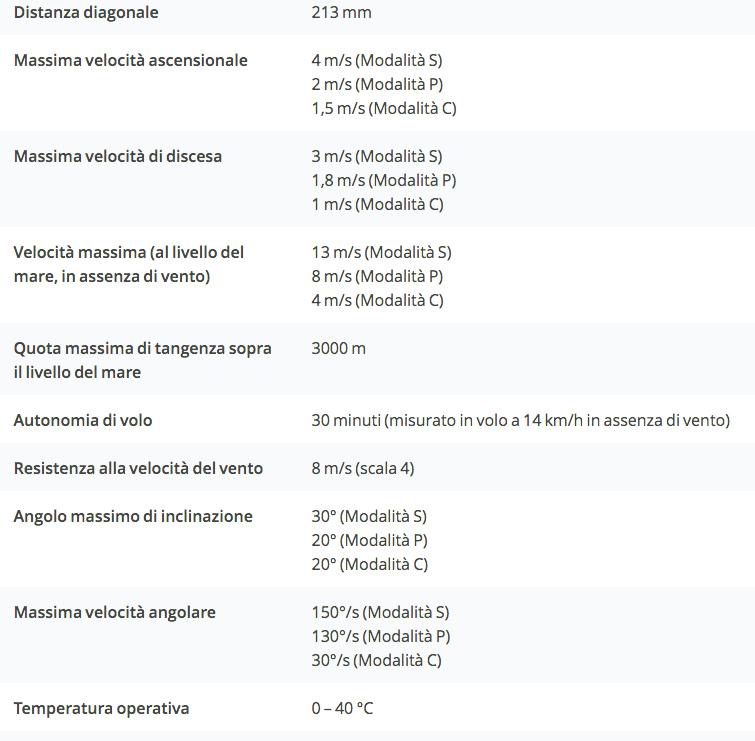 The importance of basic indicators

The values ​​of the basic indicators of the drone technical specifications indicated by the manufacturer are very important, as they allow you to identify if that type of drone is suitable for the use we want to do with it.

More generally, the indicators such as: flight range, maximum video transmission distance, maximum wind resistance and on-board sensors, are the fundamental parameters that influence the use and usability of the drone.

For example, if the drone we want to choose is a drone for leisure, whose main use is for photos and videos, it is important that the drone has both good flight autonomy and good wind resistance. Likewise, on-board sensors against obstacles are now an important standard for drones of all sizes.

As well as for a professional drone destined to carry out aerial photogrammetry it is important that the drone has a high flight autonomy, which reaches a suitable tangency altitude for the survey, has good wind resistance and can mount a payload (camera) of adequate weight for aerial photogrammetry.

Needless to point out that the presence of positioning systems on the drone such as GPS, Glonass, Galileo, RTK, etc., are to be considered fundamental for a professional drone and are part of the basic specifications.

These specifications identify performance capabilities which in some fields of application for the use of the drone, such as precision agriculture or confined inspections, can play a strategic role.

As it is easy to understand the payload is the real “core” of the drone. The payload, be it an amateur or a professional video camera for filming, is in fact entrusted with the task for which the drone took shape.

Leaving aside professional paylaods, whose technical specifications depend on the purpose of the paylaod, for most drones equipped with cameras the indicators to be considered are at least the following:

Where to get the technical specifications of drones

As already mentioned, unfortunately, not all manufacturers show the same indicators. Sometimes some of the basic indicators are incomplete or even absent.

If some indicators are missing, the alternative is to search the net (but this work has already been done for the drones reviewed by 4mydrone), or write to the manufacturer and ask for indicators or specifications of your interest.

Note regarding the images: The Drone relative to the highlighted image is taken from pixabay.com, they are free for commercial use, without attribution request. The author is maja7777. The extract of the technical specifications is taken from the DJI store website and the data refer to the Mavic Mini drone. However, each image mentions the author who is its legitimate owner. The use of images has the exclusive purpose of a better understanding of the contents of the article.

I’m in the process of researching the specs for drones, at which time, I plan on making my purchase.

Since I know little to nothing (closer to nothing), I appreciate all the information you covered. It can be a maze trying to determine which specs are important. I want my purchase to be my only purchase and, obviously, I only want to purchase once and be satisfied with its performance.