Air Rules – Ban on the use of drones at sea

Air Rules – At the sea … without drone

Summer is the best time to fly with the drone as a hobby, take photos and take aerial shots and selfies, thanks to good weather conditions.

However, by regulation, there are areas after which you cannot use the drone. One of them is the beach. In fact, in the period between 1 June and 30 September it is not possible to fly with the drone 100 meters upstream and 100 meters downstream of the shoreline or coast line or in the red area represented in the figure:

Graphic illustration of the no-fly zone on the beaches – 4mydrone

But where does this rule come from and what does it say in detail?

To understand where this rule derives from, it is necessary to make a small review of the rules of the air, or rather the set of those rules whose purpose is to guarantee the safety and regularity of all flights.

The premise to fully understand the rules of the air, and in particular this specific rule on the flight of drones near the sea, and that drones are equated to aircraft and therefore subject to the rules (at least in part) valid for planes.

Flight rules, on the other hand, are the set of rules that all pilots must observe once in flight to ensure the safety of air traffic and are further divided into:

The rules of ICAO annex 2 are therefore the mother of the rules of the air, and those of each state derive from these.

ENAC has therefore replaced and integrated the air rules with those defined in the SERA regulation and has given rise to the Air Rules ITaly known with the acronym RAIT.

Hence the info-graphics relating to the genesis of air rules: 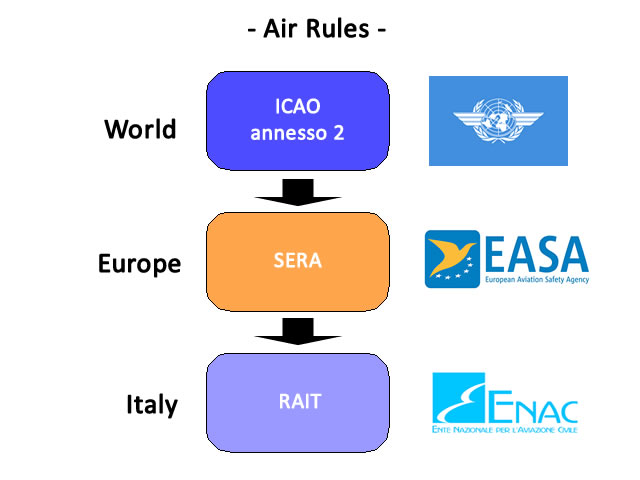 The RAIT regulation, downloadable in pdf from ENAC website, on page 17 shows the following:

RAIT. 5006 Minimum heights for flying over the beaches

“Except as provided by SERA.5005 f), except when it is necessary for take-off or landing on coastal airports, from 1st June to 30rd September inclusive, a VFR flight must not be performed above the beaches, within 100 m from both sides of the coast line, at a height of less than 300 m (1 000 ft). This requirement does not apply to state aircraft and aircraft engaged in the special operations referred to in art. 4 of the sera regulation.” (source ENAC)

Although the RAIT.5006 standard refers to aircraft (manned), and not explicitly to drones, and since, as reported in the introduction, drones are considered remotely piloted aircraft, this also applies to drones. In fact, it is therefore one of the rules of the air, which in a general perspective tends to preserve the tranquility of those who crowd the beaches, avoiding flights with a flight altitude of less than 300 m.

Hence the ban on flying over beaches, as drones cannot fly above 120 meters A.G.L. (considerably less than 300 meters of RAIT.5006), unless specific authorization is obtained.

It should also be noted that the d-flight site marks the entire Italian coast with a red stripe without interruption.

Although there are rumors about the possible revision of this aspect of the rules of the air and in particular of the RAIT.5006 standard, as regards drones, for this summer (and perhaps also for those to follow given the speed with which in Italy review bureaucratic aspects), the rule must be respected in order not to fall into an offense (complete with a fine and criminal sanctions).

Italian and foreign holidaymakers with the drone are warned!

Note regarding the images: The images showed in the article are made by 4mydrone, who is the legitimate owner. The use of the images is exclusively for the purpose of a better understanding of the contents of the article. The highlighted image was made by 4mydrone on a basic photo taken from the pixabay.com site, free for commercial use, whose author is Walkerssk.