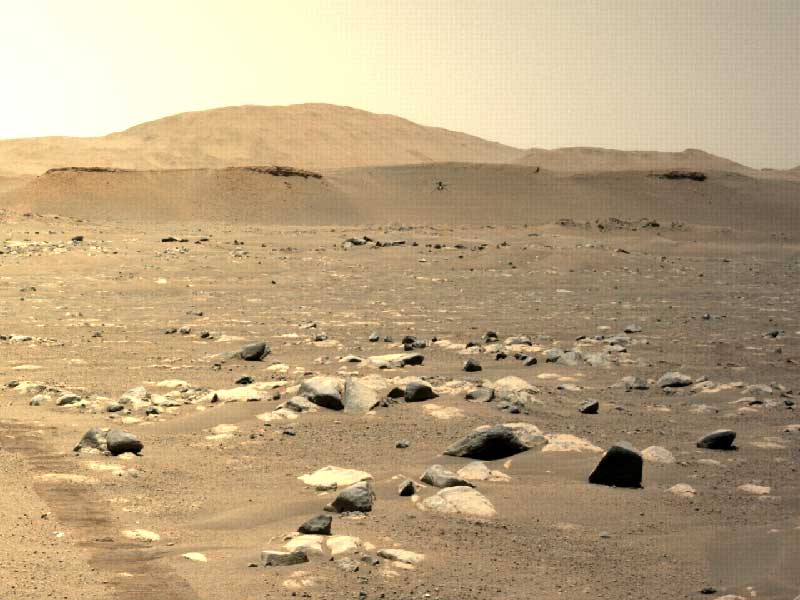 Good news from Mars! Ingenuity the Martian UAS-drone has successfully completed its third flight over the red planet. Yesterday April 25, 2021 April 25, the drone again detached itself from the Martian ground at 12:33 p.m. local time of Mars, initially reaching the same altitude of 5 meters with respect to the ground A.M.G.L. – (Above Mars Ground Level).

Ingenuity’s third take-off went smoothly. As already mentioned, the drone initially reached, after take-off, the altitude of 5 meters and then moved horizontally by 50 meters, with a speed of 2 m/s equal to 7.2 km/h.

Ingenuity’s flight duration was 80 seconds and was followed by the NASA /JPL Flight Control Center.

As mentioned, during the first flight, Ingenuity reached the altitude of 3 meters (A.M.G.L.) in hovering, as shown by the altitude graph determined by the onboard sensors.

Ingenuity – Purpose and Technology on board

Ingenuity’s mission to Mars is the result of engineering calculations and sophisticated and technologically advanced design.

Ingenuity has undoubtedly been designed and built to demonstrate that the use of drones also in space missions can be useful for carrying out an accurate mapping of planets such as Mars, like the terrestrial drones used for aerial photogrammetric surveys. Seen in perspective, the use of drones in space missions could in fact more information to identify points of interest (space waypoints), considering that the Ingenuity drone was designed to provide images from above with a resolution about ten times higher than that of orbital images.

Ingenuity uses counter-rotating coaxial rotors approximately 1.2 m in diameter. Its intelligent payload is a high resolution camera facing down and another facing the horizon, both of which are also useful for control purposes for navigation, landing and scientific soil surveying. All its components are able to withstand the stresses caused by launching and landing, but they are also resistant to the enormous changes in temperature caused by the Martian nights.

The solar panels with which it is equipped are able to recharge the batteries with 40 Wh, which have a nominal capacity of 2 Ah, are six lithium ion cells supplied by Sony.

The sensors of Ingenuity

The heart of Ingenuity is a Qualcomm Snapdragon 801 processor with a Linux operating system, that is, it is a processor found on fairly dated mobile phones. The Snapdragon 801 has the task of controlling navigation, through the two paylaods (cameras) mentioned above.

Due to the inconsistency of the magnetic field of the red planet, it is not possible during the flight to use one of the well-known sensors on terrestrial drones: the compass, which Ingenuity is not equipped with.

There are other sensors well known to ground drone pilots: gyroscope, inclinometer, altimeter and anti-collision sensors.

Other sensors on board Ingenuity are:

For more details on the technology used by Ingenuity we recommend reading the pdf “Mars Helicopter Technology Demonstrator“.

Therefore, the importance of the development of other new and sophisticated sensors that can be applied to UAS systems is one of the fundamental business aspects in this field, together with the algorithms, SW and methodologies for the acquisition and post-processing of images for mapping.

Image Credits: The cover image is taken from the NASA website (NASA/JPL-Caltech), as are the images and video in the post, which are owned by NASA. The use of the images is exclusively for the purpose of a better understanding of the contents of the article. Thanks to NASA for sharing these wonderful images.