written by Fabio Affortunato 1 May 2021 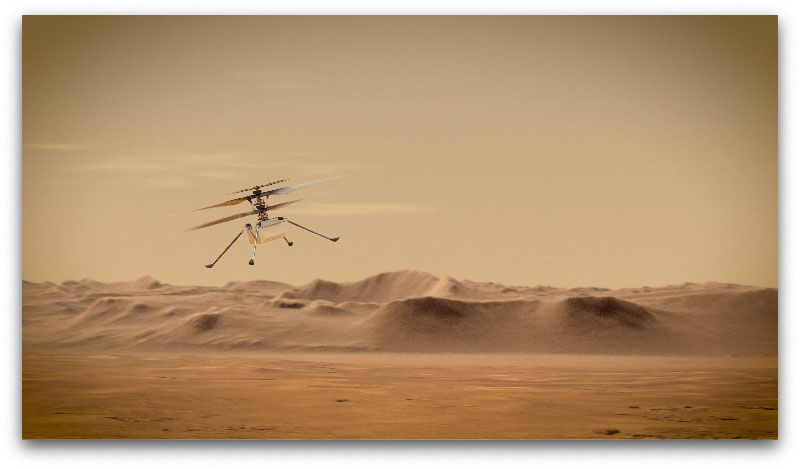 The Martian flights of NASA’s Ingenuity drone continue, although the fourth flight initially scheduled for April 29th, 2021 had to undergo a skid to April 30th, 2021 at 12:33 p.m. local Martian time. The reason for the new flight planning was the incorrect conclusion of the drone take-off sequence.

But let’s see in detail what happened to Ingenuity!

Ingenuity on April 29th was scheduled for its fourth flight, but the take-off was interrupted due to the incorrect conclusion of the sequence. The interruption is due to the watchdog timer that has detected anomalies.

NASA specified in an official post that there is a 15% chance that every time Ingenuity attempts to fly, the watchdog timer blocks the drone from switching to flight mode.

This problem is therefore related to the flight sequence that fails to initialize correctly until the end of the countdown that is needed by the control system. Hence the entry into operation of the watchdog timer with the take-off block. Obviously, its solution requires some software or firmware changes that cannot be managed remotely.

In consideration of the delay due to the Earth-Mars distance, the flight data that took place at 12:33 pm Martian time on April 30th, arrived on Earth at the JPL NASA (Jet Propulsion Laboratory) center, at 19:39 (Italian time), and confirmed the success of Ingenuity’s fourth flight.

Ingenuity rose to an altitude of 5 meters above the ground, before flying south for about 133 meters, then back, for a round trip of 266 meters. In total, Ingenuity remained in the air for 117 seconds. This is another record for the helicopter, even compared to the spectacular third flight, as the maximum flight duration was estimated at 90 seconds!

In its reconnaissance flight, Ingenuity captured many images with both the color camera and the black and white navigation camera; about 60 in total during the last 50 meters before it returned to its landing site. Link to the post on the fourth flight published by NASA.

Purpose of the images captured by Ingenuity

As the NASA post states “the purpose of the images captured by Ingenuity is to provide an aerial perspective of Mars that humanity has never seen before. We will use these images to study the characteristics of the ground surface. Some of our images in black and white were taken as stereo pairs, allowing us to test our ability to create 3D surface images and study the elevation of different sites below us. Adding this dimension to future missions could offer a wide range of opportunities for exploration in regions that rovers cannot roam, close-ups that orbiters cannot provide, or ways to extend the reach of future human explorers.”